As a planned community in the late 1920’s San Clemente’s 1,260′ pier would be built at the same time home plots were being sold and people were moving it. Note the following from the above picture… 1) the horizontal stringers (beams) on the pilings stop about 1/3 of the way out…2) there is no obvious feature associated with lifeguarding. Instead ….

An “Observation Tower” on South Side

Mid to late 30’s. This “first” lifeguard tower was probably built tall so the guard could see over the pier to the north. Note its unique 8 sided structure with matching pointed roof. We will see that again… On September 25th, 1939 a rare tropical storm (1939 Long Beach tropical storm, El Cordonazo, or The Lash of St. Francis) hits Southern California and the end of our pier is destroyed. Only the inside pilings with the horizontal stringers are left standing. But look closely at the end of the shortened pier. It appears the observation lifeguard tower on the beach survived the storm and was relocated to the end of the pier… ironically near our current Zero Tower’s location. Technically this becomes our first Zero Tower.

The rebuilt 1,200′ pier would include side extensions at the base which later would support the  San Clemente Boat Club (1949) and the current Fisherman’s restaurant. Look closely at the southern platform (left). There is an 8 sided lifeguard tower that looks nearly identical to the one from the late 30’s. We speculate that tower was moved from the beach after the storm of 39 to the end of the shortened pier then to this location when the pier is finished.

50’s. Bucket Tower on the Pier

So far this is the only picture we have of the open bucket tower on the Pier. Note the ladder going down to the stringers. Steve Bro: “I remember this bucket when I was a kid fishing on the pier in about 1957 as well as when we would be bused down to the beach before the start of every summer for a water safety demonstration.  If was a full blown production: fake victims in the Water, guards responding from the beach, a guard jumping out of the bucket on the pier (very vivid memory), the rescue boat sweeping around the end of the pier at full speed and a guard jumping out of the boat to assist in the rescue”. 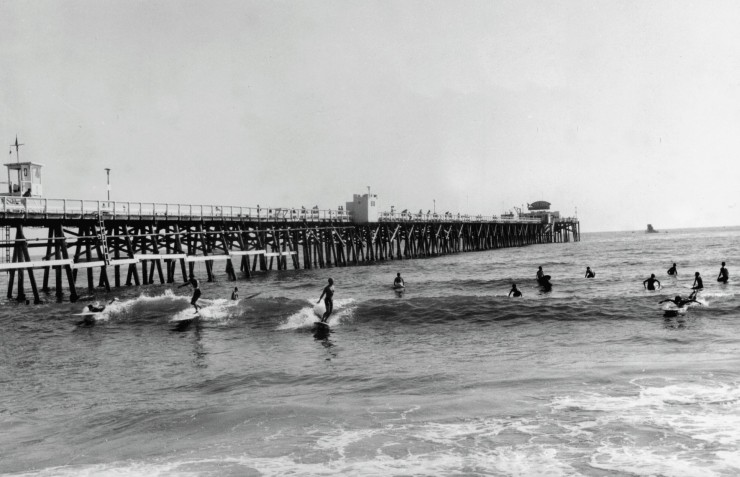 With the Boat Club occupying the decks at the base of the pier the original 8 sided tower is lost from history. The early 60’s see a dramatic expansion in beach culture and lifeguarding in San Clemente. The above picture clearly shows a “white box” lifeguard tower “Zero” with its distinctive  maritime mast with US Flag and surf warning flag.  Note the wooden ladders from the deck to the stringers. Lifeguards would use these during rescues in the 60’s and 70’s

Mid 60’s. Located on its own pilings and platform the new Zero Tower was designed with the help of Lt. Steve Chorak and head city carpenter Burle Hancock. Constructed to sway with the swells this Zero tower is the only pier structure over the water that is still standing from that era. It quickly became an iconic image used throughout San Clemente and its dual loud speakers, amplified by the shape of the pier bowl would be synonymous with summer in San Clemente.

These pictures are from lifeguard training during Zero’s early years in the mid 60’s. Note the fresh new paint on the deck. That is Captain Phil Stubbs talking to the rookies. He is explaining how to time your drop with the incoming swell to hit the deepest water then “scoop up” to stay shallow. It was common to make rescues from the upper deck, lower platform and even climb down the ladder in the foreground.

Current Zero Tower has retained its historic appearance but changed dramatically inside. The old pivoting speakers are replaced by a digital sound system that can pin point announcements. Fiber optic cable supports internet access and there are cameras and hi gain wireless antennas communicating with a network of rescue cameras located along the beach. On its roof is a high tech weather station constantly updating its own web page and underneath is a water temp probe with the “real” water temp in the surf zone but some things never change. It is the first tower open in the morning and the last to close at night. When the flags are up on Zero… San Clemente Lifeguards are watching the water.