1958 Our New Department Gets A Boat 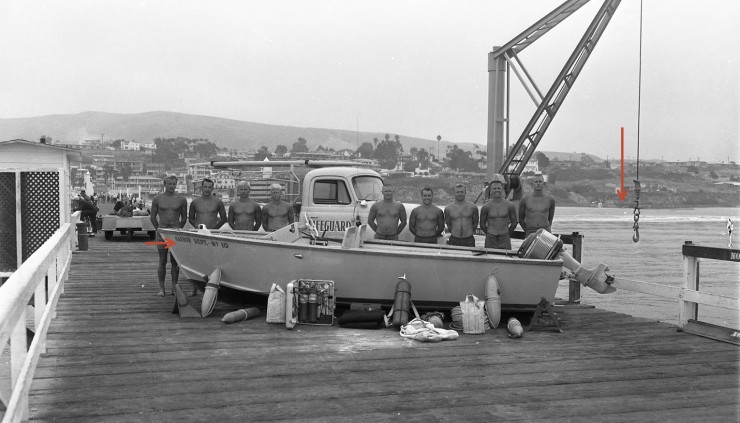 In 1958 the San Clemente Pier was the only boat launch between Newport Beach and Oceanside so the Orange County Harbor Department  provided Chief Dick Hazard and the newly formed San Clemente Lifeguard Department with one of harbor utility boats; radio call sign 5408. This was stored in lockers at the base of the pier and towed with the cart shown, dropped over the side and accessed via a metal grating mounted to the pilings. Lowering, boarding and releasing a 2,000 lb boat between big swells is the stuff of great stories.

The agreement with OC Harbor Dept. was to respond to calls from Laguna to Catalina to Oceanside which our guards did with gusto. Jerry Hawk has story of crewing with Phil Stubbs tracking a boat fire all the way to Catalina and arriving 30 min before the Newport Beach Coast Guard Cutter. Then beating back into a storm that pushes them down to Oceanside… in the dark. “Wooden boats and iron men”, “5408 was a ‘wet’ boat in heavy chop and rough seas; sturdy construction with ½” wood hull and a self-baling cockpit and a ‘mighty’ 75 horse power Evinrude outboard engine”.  Jerry Hawk

At the base of the pier, on the north side the garages shown above were reserved for the lifeguards and thus our first official “HQ” (more detail in another storyboard). Note the ramp… there is good story of wrestling this heavy wooden boat down the ramp and into the garage. We lost it once and punched the bow into the railing of the underpass.

In tribute to their ingenuity and resourcefulness all the equipment in this photo is probably surplus or used then refurbished by these guards. The garages (in the previous picture) are moved from the pier and the units are surplus from the police or military. The old harbor boat has new paint, steering console and real CF Numbers with registration on the bow. “CF 0108 X C” . You will see those again…

With our proven rescues services the county contracts with the City to expand service to county beaches up to South Laguna. Thus the increase in staff. Normally this boat was stationed near the pier in Dana Cove before the harbor. There is rumor that it sunk there once. Still researching …

With our own HQ, numerous “units” and a boat, San Clemente is assigned its own call sign… “KFG-592 was the FCC issued call sign for Station 56 / City of San Clemente Lifeguard Radio” Steve Bro.  Station 56 is born and now our boat is changed to 5608

1969-70 Note the matching CF Numbers with the last picture but credit Steve Chorak for a major remodel to the same boat. That is Curtis Van Ars Dale and Jeff Hartman watching rookie training. In the water facing on the left is Ken Casper a future boat operator.

Outboards are extremely dangerous so a technique was developed to safely put guards in the water while keeping them and the victims clear of the props… the Whip Launch. Maybe the most fun part of rookie training.

The deck hand with buoy and fins on would crouch in the stern corner with one foot/fin on the rail in racing dive position. The boat operator would accelerate to full throttle straight towards the beach then throw the boat over into a tight power slide while yelling “GO“. A combination of centrifugal force timed with a powerful leap would whip launch the guard 10′ high and up to 30′ across the water where he porpoise dove underwater. After a few big kicks he surfaces next to his astonished victims and pulls them in.  It was dramatic, effective and a lot of fun. (looking for pictures)

Of course the good guys could punch right through the back of a big swell, emerge on the front face and body surf into the tube… then roll out the back where boat was waiting to pick them up…. just for practice.

It is remarkable that Chief Dick Hazard (left) could secure the funding for a new rescue boat from a fiscally conservative City that was strapped for cash. The boat was built at Marshall Boats of Santa Ana and towed to Lido Shipyards in Newport Beach. In this photo Phil Stubbs, a blond Tom Metzger and Dick Hazard take delivery of 5690. 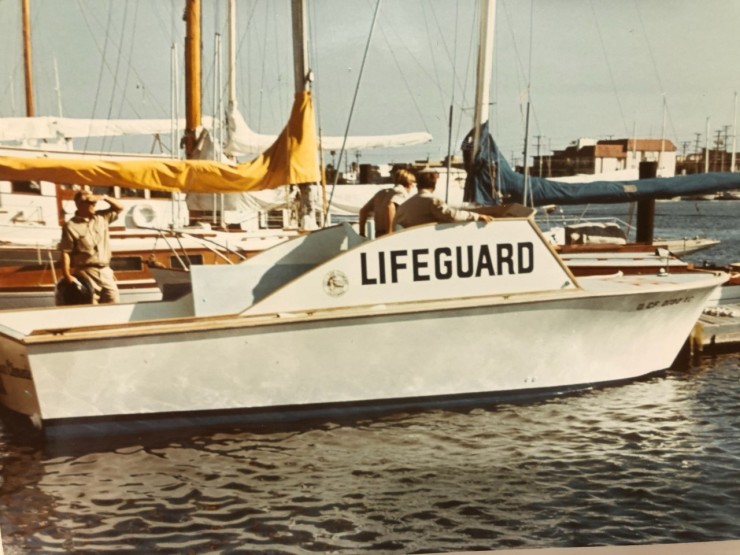 The first taste of salt water as Steve Bro (left helm) is at the console. Designed similar to the Baywatch, Surfwatch and Seawatch Rescue boats used by our northern cousins this boat would turn out  to be truly unique on the coast.

One Of  A Kind

In the above picture Tom Metzger is handed the keys and the responsibility of learning to handle a 30 foot boat that was built in a 34 foot mold. Due to budget constraints the last 4 feet were blocked in the mold but with the same dual V8’s, beam and bow of a bigger boat. A smaller boat with lots of horse power and a different turning radius… Tom would make her shine. There is great story of the celebratory christening cruise from Newport to it’s new home in Dana Harbor next to the harbor patrol boats. 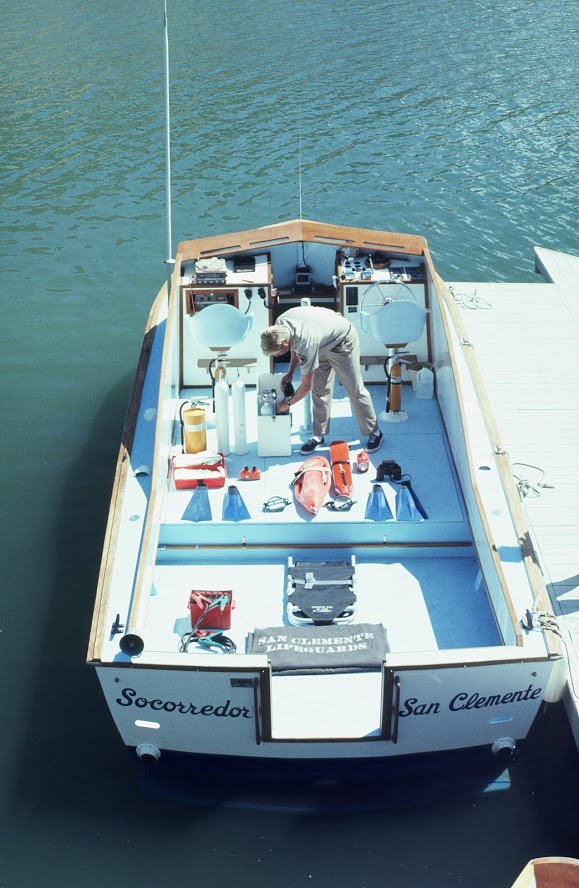 San Clemente Spanish Village by the Sea is very different place from Newport, Huntington and LA County so Hazard gave our boat a different name: Soccorredor which means helper in Spanish. Note the swim step, rear transom access and self bailing sealed rear deck.  She could take a wave over the bow, loaded with guards and victims and sea water would drain out the scupper holes in the stern. 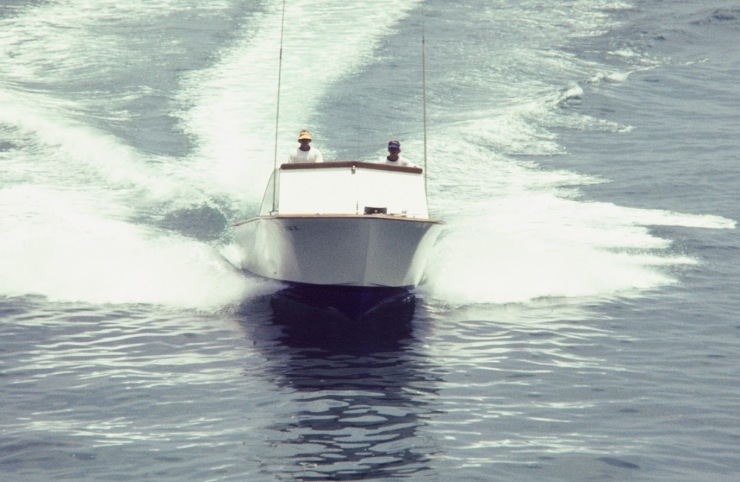 (1974: Mike Larson and Dave Vick in the above picture) On any summer day 5690 would leave her berth in Dana Harbor and make the trip down to San Clemente arriving about 10 am to begin patrol duties. In the early 70’s that started with splitting the surfing/swimming area at T-Street and later to move the surfers south to “Beach House” (lots of great story here since many lifeguards where T-Street locals).  5610 could get to any tower in less that 2 minutes and provided rescue, backup and breaks for all the towers and units.  A favorite memory of tower guards was having 5690 back down and the phone ringing saying the boat is asking if you want a ride…. Of Course!

“Lynn Hughes, the City’s Marine Safety Lieutenant who started his career in Seal Beach, replaced Dick as the Chief in 1980 and rapidly inherited the budgetary problems resulting from Proposition 13. One of the first cuts was that of the rescue boat “Socorredor”. It was a tremendous loss to the department, but one that had to be endured to be able to maintain adequate staffing on the beach.

The importance of each individual lifeguard in a beach tower became top priority as did the need to have enough eyes on the water in order to spot all rescue victims. Tower guards were provided larger towers, sun cutting windows, more shade, better sun-screens, more breaks, closer supervision, and more extensive training in water observation and victim detection” Lynn Hughes, Chief 1980

“The summer of 2003 saw the first City deployment of the exceptionally adaptive and versatile Honda PWC Rescue Craft which is “loaned” to the City for $1 per year. ” Lynn Hughes, Chief 1980 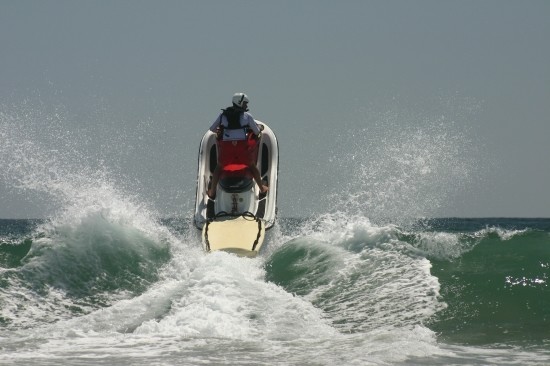